So, two weeks are almost over and my time to return the iPad Pro is ending. The question, whether I am going to keep the iPad, has now to be answered.

My answer is no, I am returning the iPad. I would very much like to keep it but it does not fulfill my needs entirely. It is almost there, but not quite. 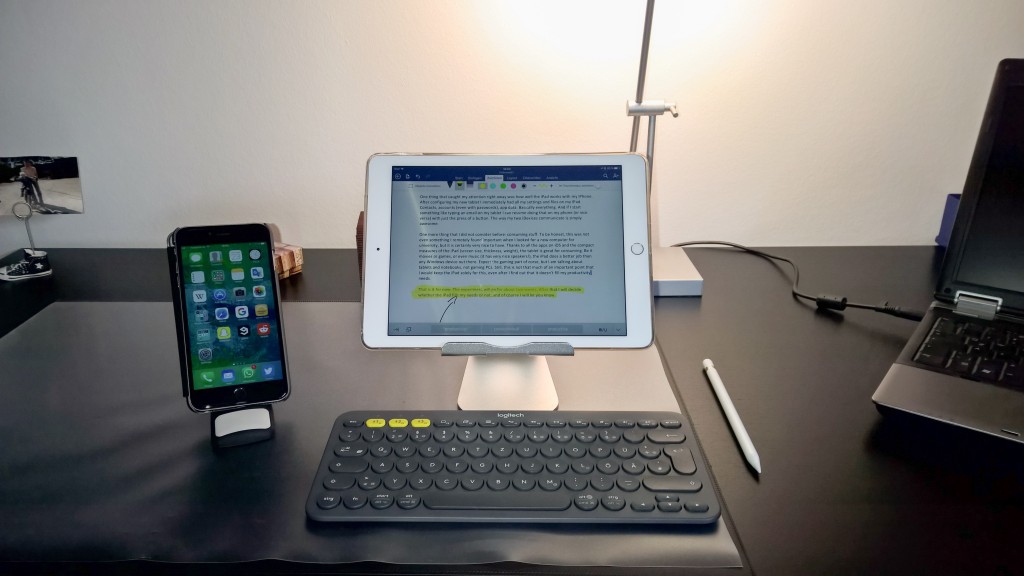 However, I am going to miss A LOT of things, no matter what other device I am getting afterwards. The display is simply stunning and I have never seen a device with such a great screen. Not only are the colors very accurate and the contrast extremely high, but also is TrueTone a feature that I do not want to miss anymore. Well, I will have to, of course. The display adjusting to the temperature of the light of the environment is so convenient and it makes starring at the display so much better. I had a few late night working sessions where I typed some documents. I still know how tired my eyes became on my old computer. Not so with the iPad. The screen is a joy to look at and it is great for your eyes.
The “couch surfing ability” is probably the best in its league. With its light and slim design the iPad is a pleasure to hold and its screen size is the perfect mix of productivity and portability. Being productive on 10 inches works as great as doing leisure stuff. And whoever now wonders, how one can be productive with 10 inches, to those I can say that it is iOS that makes this possible.

iOS is a very easy to use OS but the way things work is simply intuitive and logical. It is VERY different to Windows and it takes getting used to. However, once you learned how to use iOS, it just flies. Oh, and of course the performance, that flies too. Everything opens instantly, even 4K video rendering or playing GTA San Andreas make the device barely warm and the battery drops only a few percentages. The iPad Pro is a simply efficient and very well performing device. Yes, it can compete with an expensive laptop in that matter and I’d say that in terms of system performance, it even beats most.

Last but not least I am going to miss the apps. I am really not an app guy who installs a lot of them. That’s why 32gb are still enough for my needing. It is just that the apps are so high quality and beautiful that it is a pleasure to use them. Also it makes consuming stuff a lot more fun.

How the iPad works together with my iPhone is magical (to use Apple’s word). This is simply comfortable and innovative. More than that, it makes working actually fun and very efficient.

Why am I returning it then? The answer is Microsoft Office. Sure, I could simply use a different software, but let’s face it: if you need compatibility, Office is the way to go, and you never know when you need that compatibility. But it is not Office itself, it is the small things. I have created some longer documents on the iPad without bigger issues and they look very nice. However, “without bigger issues” still means that there were some smaller ones. I do not mean that one needs to create tables in Excel, then copy them into Word to have a complex table in a word document. That is just a different way, a different workflow that one gets used to. I do mean that once the table is pasted, it cannot be edited and formatted, only filled with data. Worse, it cannot be resized.

Pictures can be added and formatted with no problems. However, they cannot be positioned with the help of a grid. Therefore they cannot be aligned perfectly to the left, center or right. Also it does not seem to be possible to change the background of a document.

Palm detection works great in every app expect OneNote, where I need it the most.

It is those small things.

It is a pity, really, because those are little things that might be patched in the future. But might is not what I want from a device that I will need for university. Also I cannot be a hundred percent certain that the device will be compatible with everything once I start studying.

It is this very lack of certainty that makes me return the iPad. Probably Office will be updated, and my issues will no longer be existent. Probably the iPad will be compatible with everything that I will be confronted with in university. It is just that probably is a word that I do not want to have to call a device that I need to rely on this badly.
If I am getting a Surface afterwards I will miss so much stuff. So much, that in that case I do not want the Surface, I need it. Having to say that is actually quite a huge compliment to the iPad Pro.

Also, I meant it when I said that the iPad will never ever replace your computer, but it might make you overthink whether you really need one. If you are an average user who needs to do some normal productivity stuff and who also wants to have a device for leisure things, the iPad Pro is for you. It will show you that you do not need a computer. I am very sure about that.

However, once one needs a little bit more than that, the iPad can no longer fulfill all needs. IOS is just too closed of a system – but one will miss out a lot of the things that only the iPad has to offer, especially if you have another iOS or macOS device.
Let’s just summarize it that way: the iPad Pro is the device you want and need if you need basic productivity only. No other device is that good at being a tablet and a computer at the same time, not even the Surface.

However, once you need a little more, the iPad Pro is only the device you want, no longer the one you need. It is a pleasure to use the iPad Pro and it does a lot of things very well, but the closed nature of iOS limits it too much. Therefore the iPad can be a great addition to your existing setup for sure, but it can no longer be your main device.

In my case I am probably getting a Surface later this year. I no longer want the Surface, I need it. The alternative would be to get a normal PC next to the iPad but if you read the first part of that “review” then you know that this is not what I want.

Farewell, my lovely iPad, you will be missed.