There’s a lot of conversation around the #TwitterFiles. Here’s my take, and thoughts on how to fix the issues identified.

I’ll start with the principles I’ve come to believe…based on everything I’ve learned and experienced through my past actions as a Twitter co-founder and lead:

The Twitter when I led it and the Twitter of today do not meet any of these principles. This is my fault alone, as I completely gave up pushing for them when an activist entered our stock in 2020. I no longer had hope of achieving any of it as a public company with no defense mechanisms (lack of dual-class shares being a key one). I planned my exit at that moment knowing I was no longer right for the company.

The biggest mistake I made was continuing to invest in building tools for us to manage the public conversation, versus building tools for the people using Twitter to easily manage it for themselves. This burdened the company with too much power, and opened us to significant outside pressure (such as advertising budgets). I generally think companies have become far too powerful, and that became completely clear to me with our suspension of Trump’s account. As I’ve said before, we did the right thing for the public company business at the time, but the wrong thing for the internet and society. Much more about this here: 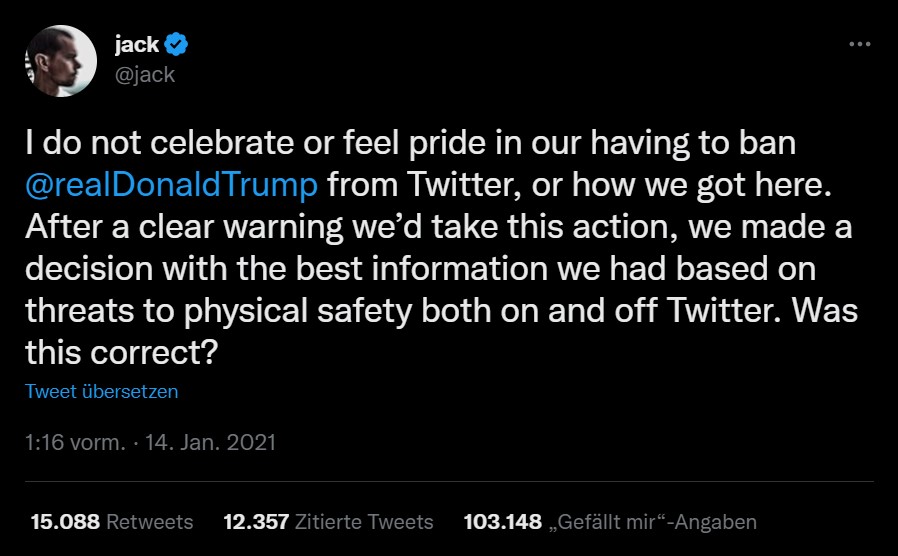 I do not celebrate or feel pride in our having to ban @realDonaldTrump from Twitter, or how we got here. After a clear warning we’d take this action, we made a decision with the best information we had based on threats to physical safety both on and off Twitter. Was this correct?
12:16 AM – 14 Jan 2021

I continue to believe there was no ill intent or hidden agendas, and everyone acted according to the best information we had at the time. Of course mistakes were made. But if we had focused more on tools for the people using the service rather than tools for us, and moved much faster towards absolute transparency, we probably wouldn’t be in this situation of needing a fresh reset (which I am supportive of). Again, I own all of this and our actions, and all I can do is work to make it right.

Back to the principles. Of course governments want to shape and control the public conversation, and will use every method at their disposal to do so, including the media. And the power a corporation wields to do the same is only growing. It’s critical that the people have tools to resist this, and that those tools are ultimately owned by the people. Allowing a government or a few corporations to own the public conversation is a path towards centralized control.

I’m a strong believer that any content produced by someone for the internet should be permanent until the original author chooses to delete it. It should be always available and addressable. Content takedowns and suspensions should not be possible. Doing so complicates important context, learning, and enforcement of illegal activity. There are significant issues with this stance of course, but starting with this principle will allow for far better solutions than we have today. The internet is trending towards a world were storage is “free” and infinite, which places all the actual value on how to discover and see content.

Which brings me to the last principle: moderation. I don’t believe a centralized system can do content moderation globally. It can only be done through ranking and relevance algorithms, the more localized the better. But instead of a company or government building and controlling these solely, people should be able to build and choose from algorithms that best match their criteria, or not have to use any at all. A “follow” action should always deliver every bit of content from the corresponding account, and the algorithms should be able to comb through everything else through a relevance lens that an individual determines. There’s a default “G-rated” algorithm, and then there’s everything else one can imagine.

The only way I know of to truly live up to these 3 principles is a free and open protocol for social media, that is not owned by a single company or group of companies, and is resilient to corporate and government influence. The problem today is that we have companies who own both the protocol and discovery of content. Which ultimately puts one person in charge of what’s available and seen, or not. This is by definition a single point of failure, no matter how great the person, and over time will fracture the public conversation, and may lead to more control by governments and corporations around the world.

I believe many companies can build a phenomenal business off an open protocol. For proof, look at both the web and email. The biggest problem with these models however is that the discovery mechanisms are far too proprietary and fixed instead of open or extendable. Companies can build many profitable services that complement rather than lock down how we access this massive collection of conversation. There is no need to own or host it themselves.

Many of you won’t trust this solution just because it’s me stating it. I get it, but that’s exactly the point. Trusting any one individual with this comes with compromises, not to mention being way too heavy a burden for the individual. It has to be something akin to what bitcoin has shown to be possible. If you want proof of this, get out of the US and European bubble of the bitcoin price fluctuations and learn how real people are using it for censorship resistance in Africa and Central/South America.

I do still wish for Twitter, and every company, to become uncomfortably transparent in all their actions, and I wish I forced more of that years ago. I do believe absolute transparency builds trust. As for the files, I wish they were released Wikileaks-style, with many more eyes and interpretations to consider. And along with that, commitments of transparency for present and future actions. I’m hopeful all of this will happen. There’s nothing to hide…only a lot to learn from. The current attacks on my former colleagues could be dangerous and doesn’t solve anything. If you want to blame, direct it at me and my actions, or lack thereof.

As far as the free and open social media protocol goes, there are many competing projects: @bluesky is one with the AT Protocol, Mastodon another, Matrix yet another…and there will be many more. One will have a chance at becoming a standard like HTTP or SMTP. This isn’t about a “decentralized Twitter.” This is a focused and urgent push for a foundational core technology standard to make social media a native part of the internet. I believe this is critical both to Twitter’s future, and the public conversation’s ability to truly serve the people, which helps hold governments and corporations accountable. And hopefully makes it all a lot more fun and informative again.

To accelerate open internet and protocol work, I’m going to open a new category of #startsmall grants: “open internet development.” It will start with a focus of giving cash and equity grants to engineering teams working on social media and private communication protocols, bitcoin, and a web-only mobile OS. I’ll make some grants next week, starting with $1mm/yr to Signal. Please let me know other great candidates for this money.

One response to “Filed: a native internet protocol for social media – by Jack Dorsey”